North Americas offshore wind industry has seen some remarkable developments over the past year. North Carolina’s first offshore wind auction is set to take place in march 2017 and throughout different Atlantic states, several offshore wind projects are now in advanced stages of development with scheduled CODs by 2022.

Reducing cost is a challenge within to the whole industry, and in the United States, will strongly depend on near-term deployment as well as sustained investments in the supply chain and offshore wind technology. Future cost reductions – which are crucial if the American offshore wind sector wants to continue its growth – could come from streamlining and optimizing construction and installation processes as well as technology advancements.

The newly released National Offshore Wind Strategy suggests that offshore wind sites in the northeast region of the country are most likely to be cost-competitive among costal areas within the next 10-15 years.

America’s first offshore wind farm has commenced commercial operations and has been sending electricity to New England’s grid since December 2016. The 30 MW, five turbine installation is located off the cost of Rhode Island. The project took two years to build and involved more than 300 workers.

A utility scale wind farm of up to 200 turbines located offshore Massachusetts is currently being developed by Deepwater Wind. With more than 1000 MW of capacity, the project “Deepwater One” is the largest offshore wind farm ever planned in the US.

Dong Energy’s Bay State Wind project will be developed of the coast of Massachusetts, in an area with a potential for at least 2,000 MW of power.

The proposed offshore wind farm – jointly developed by DONG Energy and Eversource- would be located approximately 15-25 miles south of the island Martha’s Vineyard, with first power expected to be delivered in the early 2020s. 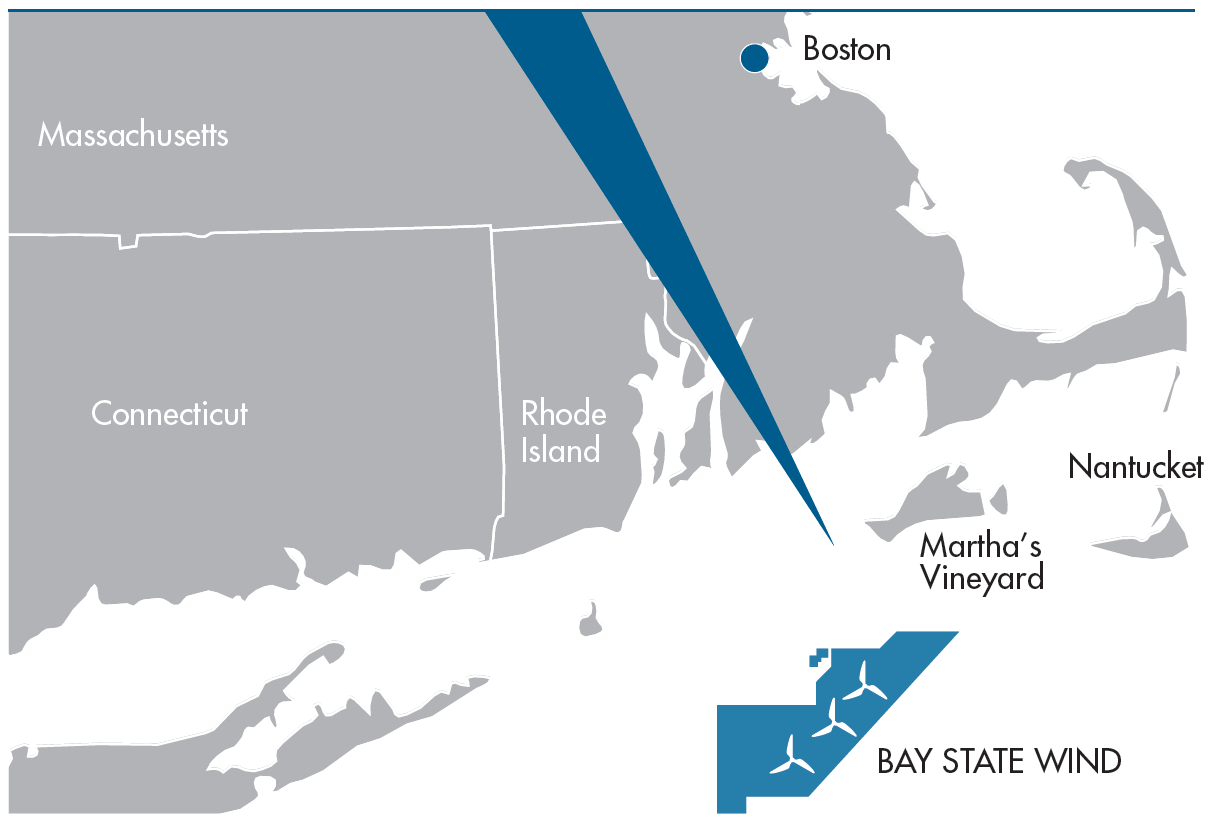 In 2015, DONG Energy secured newly assigned project development rights to a 300 square mile ocean area off the coast of Martha’s Vineyard and in August of 2016, Massachusetts formally adopted a comprehensive energy bill including a mandate that state utilities purchase 1600 MW of offshore wind power by 2027.

The first state-led procurement process is scheduled to start in June 2017, representing a landmark moment for the offshore wind industry in the United States.