Wind, photovoltaic, hydro, and geothermal power sources have made enormous progress over the past years in terms of cost efficiency as well as in technological advances and innovations. And as renewables are on the rise, one question remains: Is it possible to go 100% renewable?

The thought of satisfying the whole world’s civilization’s energy needs entirely by using energy from renewable sources seems almost like an ideology and the feasibility of replacing all fossil fuel based technologies is questioned by many who do not accept the urgency of the problem that is global warming.

But the discussion about the doability of going 100% renewable isn’t really between the political division of those who’s energy plans are celebration of fossil fuels and global warming activists, but within the group of people that have accepted the urgency of climate change and holding the rise in global average temperatures to less than 2 °C. Hence, it is not about whether to go to zero carbon, but how to get there.

To hit the globally agreed upon target of 2 °C would require deep decarbonization, which would mean reducing total carbon emissions 80-100% across the globe, by the middle of the century or shortly thereafter. 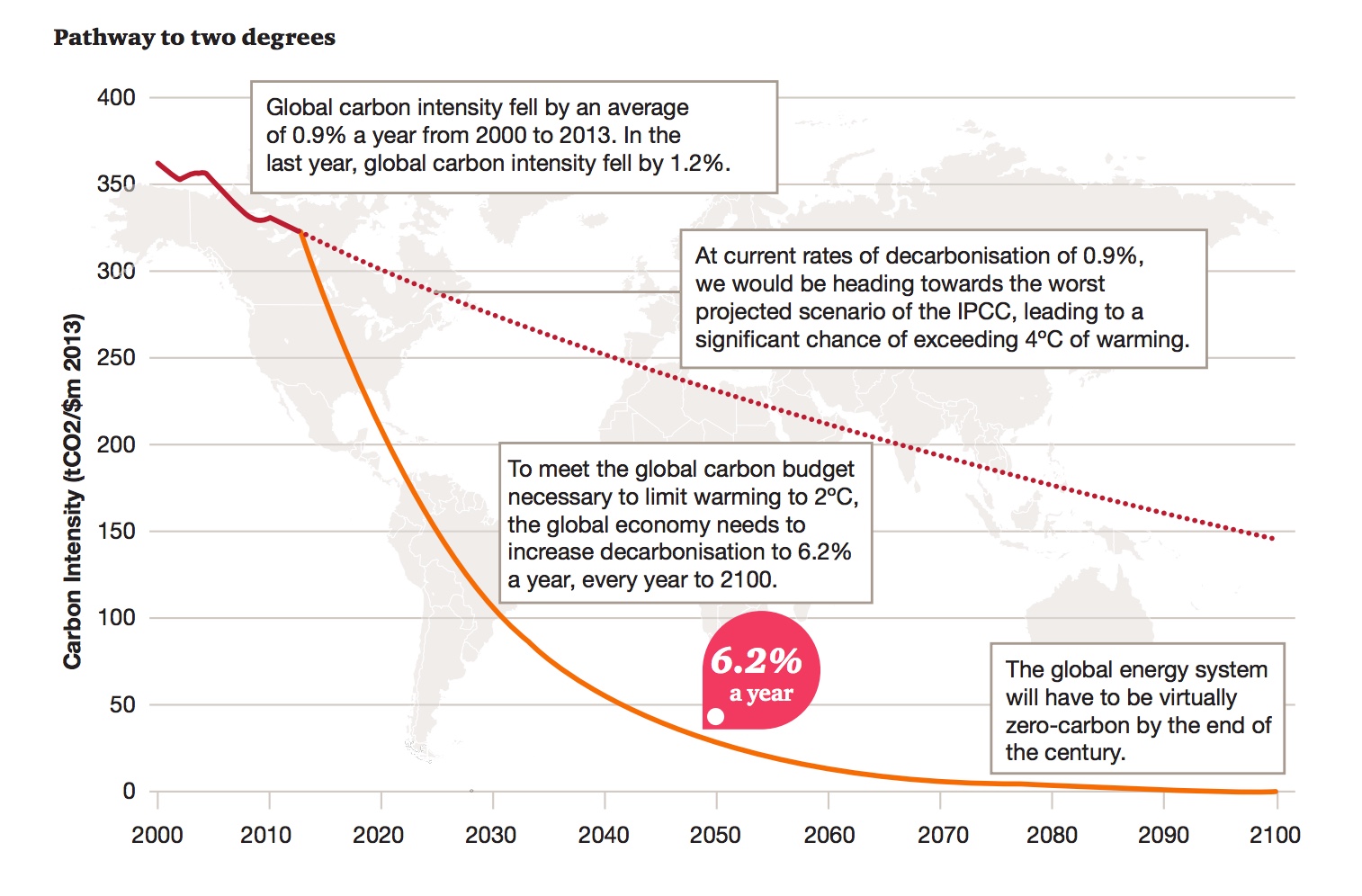 PwC’s Low Carbon Economy Index (LCEI) has taken into account the progress of the G20 economies against a 2°C global carbon budget since 2009. And currently, economic growth is closely coupled with carbon emissions and increased greenhouse gas concentrations. The consensus target by governments, is to limit global average temperature increase to 2°C. To meet this warming scenario, cumulative fossil fuel CO2 emissions between 2010 and 2100 need to be no more than 270GtC (or around 990GtCO2).

But while all governments at the UNFCCC affirm the goal of limiting warming to 2°C, following through on this goal has fallen short. The current total annual energy-based emissions are just over 30 GtCO2 and are (unfortunately) still rising. If these developments are to continue, global warming is estimated to range from 3.7 – 4.8°C over the 21st century.

When talking about the limits of renewable energy sources, one can usually differentiate between technological and economical challenges. But to be clear: There is an increasing number of tools to address these technical and economic problems and the amount of research and innovation happening within the field of renewable energy is mind-boggling.

So the dispute comes down to not IF these challenges can be overcome, but whether these problems can be solved without nuclear as well as coal or natural gas with carbon capture and sequestration. (Spoiler alert: Current modelling strongly suggesting that we will need a broader portfolio of low-carbon options before we can move to ‘no-carbon’.)

For example: A great deal could be accomplished by simply substituting natural gas combined cycle power plants for coal plants while growing renewables and maintaining the existing nuclear and hydroelectric fleet. This strategy works, for a while, but in terms of deep decarbonization this strategy will eventually lead to a dead end. Natural gas is still a fossil fuel and is incompatible with decarbonization beyond more or less 60%.

Avoiding this ‘dead end’ means developing a solution (or proposition), about how to replace all possible fossil fuel options with other balancing resources that do not emit carbon.

So to summarize; the debate about if, when, (and most importantly) how 100% of energy supply by renewable sources can be reached is a complex one.  As of now, it might be a good step to try and understand the scope of the problem, as it is one of the defining challenges facing humanity in this century.